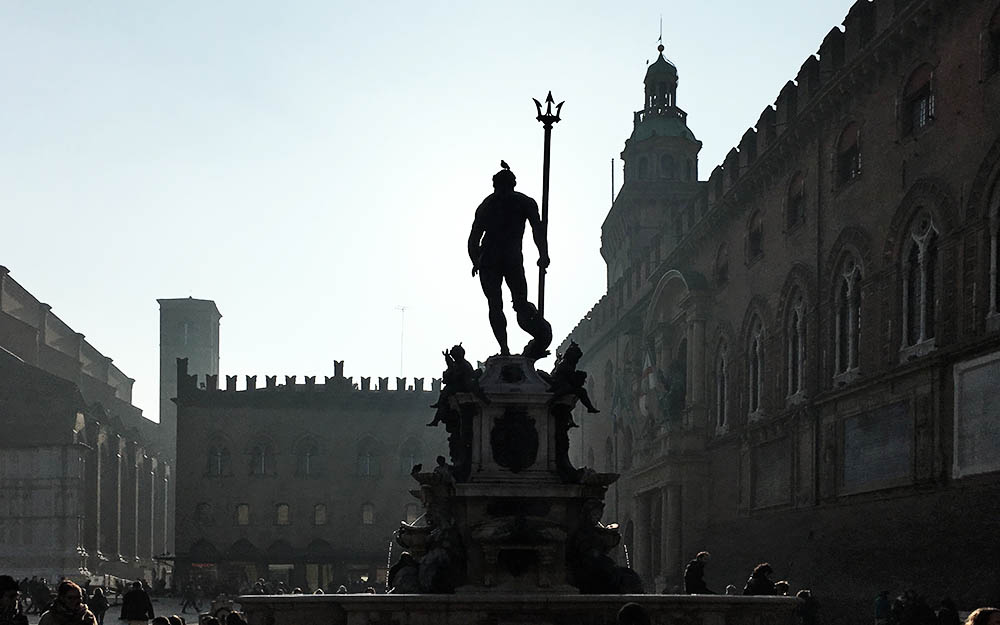 Top 10 things to do in Bologna.

Known for its ancient University, for its towers, porticoes, its historic center, one of the largest and best preserved in Italy. But Bologna is also known for its food, culture, monuments and museums, as well as the jovial and sincere spirit of its inhabitants. Here are our tips on things to do in Bologna.

One of the best things to do in Bologna is going to visit the Torre degli Asinelli. Together with the adjacent Torre Garisenda, it is one of the symbols of Bologna. Between the 12th and 13th century, over 200 towers were built by noble families both to defend their properties and as a showoff of prestige and power. Nowadays, only 22 of those towers are still standing (if you want to see them all, this map is your friend) and the Torre degli Asinelli is not only the tallest of them but also the easiest to visit. From the top of its 97 meters (and 492 steps to get there) you can enjoy a breathtaking view over the city, and on clear days you can even see over the Po Valley from the Alps to the Adriatic Sea. For visiting hours, refer to the Bologna Welcome portal (here).

The beautiful Piazza Santo Stefano and its Complex of the Seven Churches is one of the most interesting places in Bologna. The complex is a set of churches from different eras, built between the fifth century up to the twelfth as a reinterpretation of the places of the passion of Christ and is a true concentration of art and architecture.
On the second Saturday and the second Sunday of the month, the City of Bologna Antiques Market takes place in the square and nearby streets. On the stalls, you’ll find antiques, modern antiques, collectibles, and curiosities… not to be missed.

3 – Discovering the gems of the Quadrilatero: Santa Maria della Vita and the Anatomical Theater.

The Quadrilatero is a crossroads of narrow alleys that have been housing the commercial and artisan activities of the city since the Middle Ages. The names of some of the streets that are part of it clearly do not keep it a secret, you will discover it by crossing them. It is still an area dotted with greengrocers, bakeries, fishmongers, delicatessens that offer you the opportunity to shop like a true Bolognese.
But there’s more beyond the shops, because the Quadrilatero hides two rare must-see gems. The first is the small Church of Santa Maria della Vita, on Via Clavature 10, which houses one of the most beautiful, moving and dramatic works by Niccolò dell’Arca, the Compianto sul Cristo morto, a set of terracotta statues you can’t miss seeing.
The second one is the Teatro Anatomico dell’Archiginnasio, a room completely made of wood, used for anatomy lessons in a building which, in the first half of the 1600s, housed the Faculty of Medicine of the University of Bologna.

4 – Uncorking a bottle of wine at the oldest Osteria in Italy.

On Vicolo Ranocchi 1/D, since 1465, at a stone’s throw from Piazza Maggiore and among the alleys of the Quadrilatero, lies the historic Osteria del Sole: the perfect place to drink a glass of wine. Its ancient origin is testified by many historical documents, some kept inside the tavern, where between the wooden tables or in the internal décor, you can order a bottle of wine to drink in company.
The peculiarity of this unique place is that no food is served, but you can buy it in the nearby food shops and take it inside with you. For opening days and times, refer to Google or the Osteria del Sole website.

5 – Going shopping while visiting the city.

Shopping is a must – especially when you’re on holiday! – and there are three places to do this that you should not miss in Bologna. And there you’ll find something for you, no matter your budget. If you want, you can start from the cheapest places up to the most luxurious. Or vice versa!
The first is the Piazzola Market, the oldest in the city. Every Friday and Saturday, from early morning till sunset, in Piazza 8 Agosto you will find more than 400 stalls at your disposal.
The second place will lead you to stroll around Via dell’Indipendenza where you will find shops of all kinds, from clothing to jewelry, including restaurants and places where you can either eat inside or under the porticoes. At the end of Via dell’Indipendenza, beyond Piazza Maggiore, you will find the third: Galleria Cavour, a place of excellence for luxury shopping and high fashion.

6 – Unveiling the waterways and the underground city.

Not everyone knows that Bologna hides a secret and mysterious world in its underground. In the past it was a city of water, with connections for the river transportation of merchandise to Ferrara and Venice. This is one of the most hidden things to do in Bologna. Over time, the waterways have been filled in, but part of them can still be visited by … rubber dinghy. If you don’t feel like tackling urban rafting, you can always take a look at the canals from a small window in via Piella (you’ll find it here) which for a moment will make you feel in the city of the Doges!
The Bologna that does not see the light of the sun also hides other peculiarities, such as the air-raid shelters, the underground crypts of San Vitale and Agricola in Arena and of San Zama, and so much more. All guided tours can be found on this website: Associazione Amici delle vie d’acqua e dei sotterranei di Bologna. Remember to plan your visit and get all the info you need way ahead!

7 – Who needs a phone if you’re under the Voltone del Podestà?

Palazzo del Podestà overlooks Piazza Maggiore from the directly on the opposite side to the Basilica of San Petronio. It is a large architectural complex built in 1200, together with the square itself, and renovated over the course of the following two centuries. It is crossed by two roads that meet under the Voltone del Podestà, a space with a unique feature. The cross vault, supported in the four corners by four columns surmounted by the statues of the patron saints of the city, creates a sort of “wireless telephone”: positioning itself in a corner you can hear the voice, even if it’s just a whisper, of the person who is speaking from the opposite corner. Obviously, nothing can be heard in the middle. This is one of the things to do in Bologna that everyone always recommends.
In the past it was not meant as a game to play with friends, as it is now; this peculiarity was very important because it allowed lepers or plague victims to receive confession without the risk of infecting priests. If you find yourself passing by, give it a try, you will be surprised by the quality of the audio!

8 – Taking a break for a massage… made in Thailand!

After lots of walking you really need a break, and since you’re reading this page, we can only recommend a Thai massage at the My Thai Center on Via Boldrini 10/C, just a few hundred meters away from the station. A relaxing moment that you can treat yourself to every day of the week, Saturdays and Sundays included, from 10 to 20. Alone or as a couple, you will be welcomed in a place of peace and relaxation for an original traditional massage with Thai operators trained in the best schools of the Land of Smiles. After this wonderful break, you will be ready to leave relaxed and full of energy, ready for dinner or a drink at Pratello. Remember to book in advance by calling +39 391 7655744.

Bologna truly is the Italian capital of good food. Some of its products and typical dishes, such as broth tortelllini, mortadella or tagliatelle al ragù are famous all over the world. But there’s so much more to discover, such as Petroniana cutlet, green lasagna, passatelli, ricotta tortelloni, crescentine… Visiting Bologna and not having a feast in one of the city’s taverns or restaurants would be a real shame! Here you will find a selection of places recommended to you by Gambero Rosso. Where could you ever find anything better?

10 – Spending the evening at Pratello, touring pubs and wine bars.

After sunset, the amiable soul of Bologna moves to Via del Pratello and its neighboring streets: the Pratello. For several years, the area that was once on the edge of the “good part” of the city has been transformed into one of the most popular places of the city’s nightlife. Dotted with pubs, wine bars, trattorias, restaurants, and clubs where you can nibble on something while going from one place to another, it is ideal for spending a few hours in the Bolognese “nightlife”. Because even nightlife is one of the things to do in Bologna that you really shouldn’t miss!
However, should you have other plans for dinner, the Pratello is also interesting during the day. Historically devoted to artisanal arts, it has craft shops, vintage clothing, design, furniture, publishing and graphics. It’s no surprise that the Pratello has been defined by the Sunday Times as one of the most bohemian and hipster places in Italy!